skip to main | skip to sidebar

Serving in the Kingdom

We all our given opportunities to serve in the Lord's Kingdom.  Some of them are visible and others are unknown to most members.  General Authorities, Stake Presidents and Bishops have highly visible callings.  Serving Sunday School or Primary callings are much less visible.  Yet the common thing about the callings is that they are both callings to serve.

A highly visible calling just means there are more people to serve.  It does not mean the person is more favored of the Lord.  Perhaps that is why women of the church are usually not the ones who complain about not having the priesthood.  They recognize that the priesthood is a call to serve, not a badge of worldly honor, glory or the ability to tell others what to do.  And women are also given the opportunity to serve.

In the world we are taught the object is to move up in our position.  The higher up we move the more power, glory and money we can obtain.  In the Kingdom that is not so.  The Lord does not care what our calling is.  He only cares what we do with our calling.  And not just with our calling but with our personal life.

In the world we spend our time being judged and judging our performance compared to others.  In the Kingdom it is not so.  The Lord judges us based on our own knowledge, understanding and abilities regardless of what others do.  The Spirit instructs us on a personal level also and tolerates our errors individually.  Mistakes that would drive the Spirit away from one person will be tolerated in another.  We are only compared with our understanding and abilities and what the Lord expects of us.

My mother had a poem in her scrap book that I read many times growing up.

"Father, were shall I work today?"
And my love flowed warm and free.
Then he pointed out a tiny spot
And said, "Tend that for me."
I answered quickly, "Oh no not that!
Why, no one would ever see,
No matter how will my work was done.
Not that little place for me."
And the word he spoke, it was not stern;
He answered me tenderly:
"Ah, little one, search that heart of thine;
Art thou working for them or me?
Nazareth was a little place,
And so was Galilee."
—Meade MacGuire
Let us each do our best to serve in the Lord's Kingdom in what ever calling he has given us.
Posted by Stephen at 9:08 PM No comments:

One Solution for Illegal Immigration

Throughout the history of the United States we have had groups of people immigrate, some legal and some not, who were not welcomed or were looked upon with disdain by some of those who were already here. At one time they were the Irish and at another time they were the Chinese. Now they are the Hispanics.

As we know, one of the reason the Hispanics are now a target of disdain is because many of those that come here, enter the country illegally. However, they come as the "tired," the "poor," the "huddled masses yearning to breathe free". Some may say they are just looking for a free ride or to improve themselves economically. Well who does not desire to improve their financial situation?

There is not easy solution to the illegal immigration problem. On one extreme, the throw them all out solution destroys families, causes fear, shows no compassion and is really not achievable. On the other extreme the grant them all amnesty solution has been tried before but without some type of real reform it just encourages more illegal immigration.

Can there be a solution in the middle that shows compassion to those who are here, encourages respect for the law, reduces the underground economy while helping cover the cost of those who immigrate. I think there is.

The solution lies in the system our government often uses to control things. The tax system.

Legal immigrants are inclined to become part of the system and work within the law to improve themselves and also the economy. Illegal immigrants are more inclined to become part of an underground economy out of fear of being deported. Since the government still has to support the cost of them living here without taxes coming in, the illegal immigrants become a drain on the economy. Also, the businesses that are paying them under the table become a drain since the business share of Social Security and other taxes are not being paid.

So how do we use the tax system to fix this? The solution is simple. Tax illegal aliens instead of deporting them. If they don't pay their taxes then you have a reason to consider deporting them if that's what it takes. Now it's not fair for someone to go through all the time and expense to come here legally and end up paying the same taxes as those who come here illegally. There could be a tax for being here illegally.

I propose that an illegal alien pay an additional 5% to 10% tax on his or her income. Also, the businesses that hire them can pay a matching 5% to 10% tax on them just like they do for Social Security taxes. This is in addition to all the regular taxes a legal resident would pay including Social Security. However, they would not be eligible for Social Security until they became legal. If they don't pay their taxes then the government could go after them like anybody else. Non payment of taxes could include a threat of deportation if necessary.

So why should a business hire illegal aliens if they have to pay an extra tax for them? For the same reason they do now. Either because it cost less or the illegal aliens will do work that the business can't get anyone else to do. It can cost less by setting the minimum wage for illegal aliens to be lower than it is for everyone else. Even if it were set just low enough to cover the 10% tax that would still be more than many illegal aliens make and they earn it above the table.

This accomplishes a few worthwhile things in my view.

First - It shows some compassion to those who are looking for a better life. How many of us are descendants of immigrants - most legal and some not.

Second - It establishes a penalty for operating outside the law – being an illegal alien. And the penalty stays until they begin operating within the law - become a legal resident or citizen.

Third - It puts part of the monitoring responsibility on the businesses that hire illegal aliens. If the business does not pay their share of the taxes they are on the hook for tax evasion.

Fifth - It allows illegal aliens to move out of the world of fear into a quasi legal world where they can have self respect and work on becoming legal.
Posted by Stephen at 8:03 AM 3 comments: 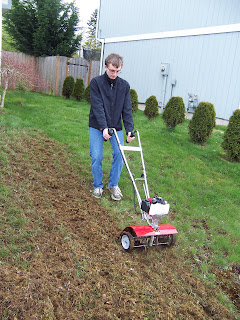 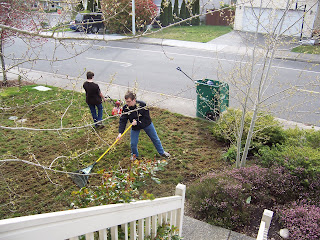 I broke down and bought one of the toys I've wanted since I was a kid. I used to have to plow our garden area as a kid. It was about a third of an acre. We had a front tine tilled that work good. I used to wish we had a fancy Troy-Bilt tiller and I think my dad did also.

I no longer have the yard to justify a large tiller. So I bought a Mantis tiller. It is a cute little machine that weighs in at 24 lbs with a 25cc engine that holds a third of a cup of oil. That little 1.1 HP motor does the job. 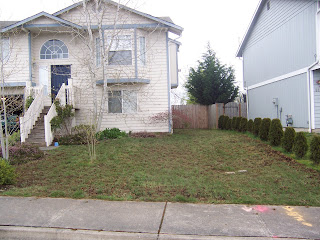 I took my boys out with me and we went to work. So far we have dethatched and aerated the front lawn and plowed our little garden plots. It removed enough thatch on the front lawn to completely fill our 64 gallon yard waste tote. I finally got to use the snow shovel I was given for my birthday to load the thatch. We have not received any snow since I got it.

I'm not sure how the front yard will survive from out attack but we had a good time working on it. I just need to fill in a couple depressions in the yard and reseed now. Hopefully later this year it will look better then the patchy moss filled lawn it had become.
Posted by Stephen at 2:01 PM 2 comments: 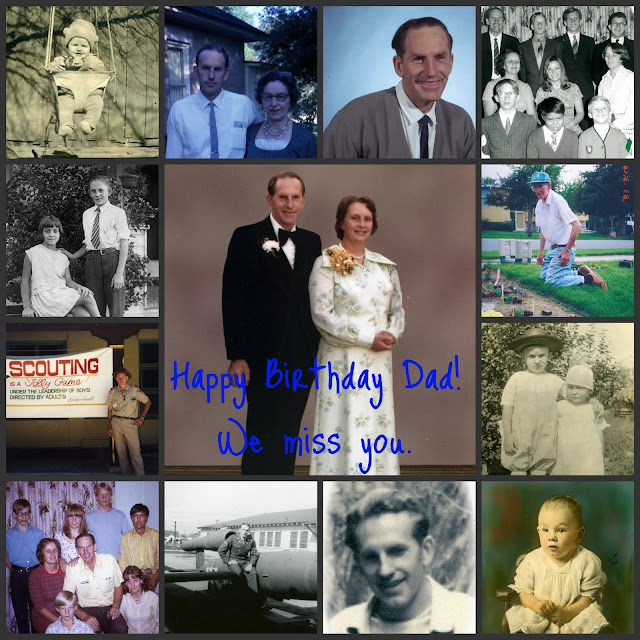 We’re gonna be in the Hudson 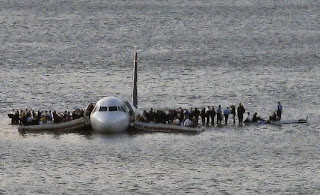 One year ago on Jan 15, 2009 Flight 1549 landed in the Hudson river after a bird strike. Watch a reconstruction of the whole flight created by Ecosphere3D

More information and videos can be found on the Ecosphere3D website.
Posted by Stephen at 7:15 PM No comments:

The happy couple has moved into their new home.  They just need to get everything put away.  It's a nice apartment with plenty of room.  After their bed was set up they got right to work building the night stand. 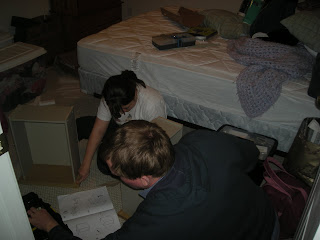 Reviewing the instructions together. 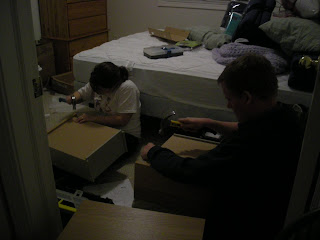 If I had a hammer. 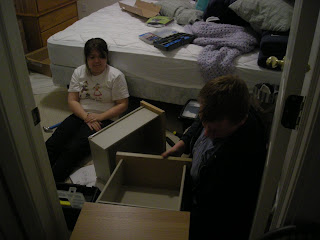 
I would like to give a big Thank You to Brett and Lacy.  Rebekah's father(Jamie) arrived Wednesday morning with the truck containing all Nathan and Rebekah's stuff.  Brett and Lacy who live on the bottom floor hauled everything up to Nathan and Rebekah's 3rd floor apartment.  They also brought Jamie back to the apartment after he returned the rental truck.  When we showed up in the evening all we had to do was empty the van.

The trip there and back went well.  I drove 1900 miles in 52 hours.  Over 1000 miles was through snow.  Idaho cleans their roads much better then Oregon and Washington.  We only had one real close call when two cars went sideways right in front of us blocking the whole freeway.  No contact was made by any one that I saw.

Jamie (Rebekah's father ) and Alex and I were glad to get home.
Posted by Stephen at 10:45 AM 3 comments:

Our Newest Baby Takes Off 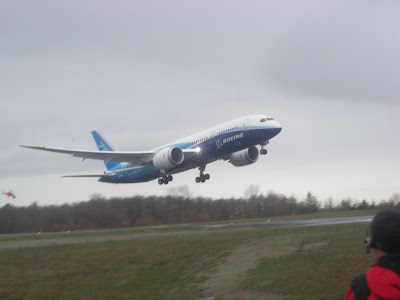 After several long years of waiting the 787 has finally taken off. (Only 2 and a half years late) I spent over a year with my "desk" in front of the left wing while it was in the factory. And it has been constant work since then.

I'd like to say thank you to all my coworkers who put in many hours to make the flight a reality. I wish I could say we were done but now we have to get everything taken care of so we can start delivering the airplane.

I hope you enjoy the pictures. Although I wish I had a better camera. 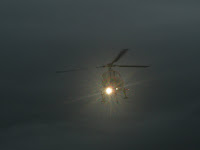 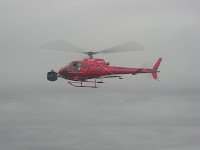 This helicopter flew all around taking IMAX movie pictures. 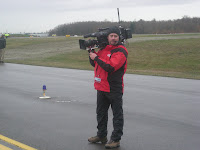 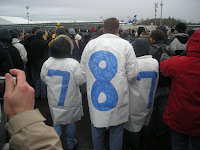